1-2. Wireless LED controller. The remote sender sends out wireless signal to receiver, and receiver controls the LED strips connected to it, such as color selection and tuning, color change, and brightness adjustment etc. The receiver is also placed between LED strip and power supply. Every controller has the function for turning on and off the lights. According to different types of wireless signal, wireless controllers are categorized as following:

LED strip lights with remote is the strip lighting that can be controlled remotely by using any wireless controllers and remotes. It has the advantage of wireless control that the remote can be placed anywhere. This is very convenient to users who don't like to get up and walk to walls for controllers.

1-4. The picture below provides an intuitive understanding of IR, RF, WiFi, Bluetooth, DMX, and PWM.

Whether it is wired controller or wireless controller, control begins with control signal entry. The entry of signal can be done through rotary knob, press button or key, touch panel or touch wheel, smartphone, etc.


2. What is the difference between 12V and 24V LED strip light controllers?

A controller has different output power on 12V or 24V voltage. It has twice power output when on 24V as on 12V voltage. For correct installation, its power output should be larger than the wattage of LED strip lights.

3-1. LED dimmer. LED dimmer has the basic necessary functions such as adjust the brightness level or turn on and off the light strip. It is the LED controller for controlling warm white, neutral white, cool white, and single color LED strip.

3-3. Multi-color LED controller. It is for color management of multi-color strip lights, such as change or select color or color-changing modes. 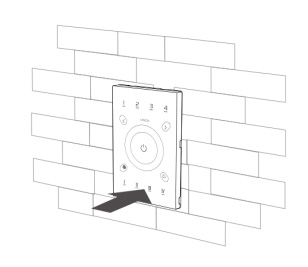 The control remote can be placed close to you. When you want to adjust the strip lighting, you just pick up the remote and operate on the remote. But the remote is vulnerable to the issue of lost, especially for families with kids. It is sometimes difficult to locate the remote after children played with it.

In contrast, wall mount controllers don't have the issue, they will always be right there waiting for you. But you have to get up and walk to the wall when you want to make adjustment on lighting.

Programmable RGB LED controller are the controller that can customize certain color management functions, such as the color change order, changing modes such as fading or strobe, the speed of each mode, etc. Users create the strip lighting scenes they like.

Certain RF RGB controllers belong to programmable LED controller. Their programming function is achieved through pressing a combination of keys with various orders, number of times, and duration.

RGB controllers suitable for cell phones can operate via the apps installed, sending WiFi or Bluetooth signal to controllers to control strip lights or other light fixtures. Their control functions are stronger than RF controllers, and usually can easily control multi-zones through grouping by the apps. 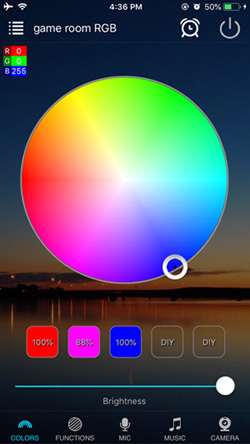 Above picture is the cell phone screen shot of LED controller app, Magic Home LED controller. As shown in the picture, you have a great deal of control choices, such as choose any color on the panel, adjust brightness, change CCT, customized DIY buttons for color-changing modes, sync music with lighting or sound to light, and more.

Note: different brand controllers may use different apps, and their functions vary as well.

RGB LED controller system can have various combinations of remote and receiver controller. This is made possible by integration of various wireless RF and WiFi communication methods. You can design your combination and buy different devices according to your installation and use preference. The following picture gives you examples of different control combinations. Of course, there are many more different combinations not shown by this picture.

The prominent feature is that it can control all 512 channels separately, and produce almost unlimited lighting effects. So it has the name of RGB controller with endless effects.

Previously, the huge size and high cost of DMX controller limited its use only to commercial applications. Technology advancement has made the size much smaller and prices more affordable. Now, DMX controllers are not only seen in large and medium lighting control system, but also, as addressable LED strip controller, are used for smaller installation of RGB strip lighting for homes.

DMX decoder converts DMX signals into PWM signals, which are able to control lights like RGB LED strips. DMX home control system is basically a controller connected to DMX receivers that in turn are connected to LED strip lights.

According to installation needs, you can connect multiple DMX receivers together and use one LED controller to control them synchronously. This synchronous operations can also be done using RF wireless connection.

For larger projects, you can choose different LED controllers, such as DMX controllers using computer. They will provide you more control options for managing RGB LED strip.

You can control each DMX receiver separately, such as each area or room in a hotel. You can set in advance the time for turning on and off the lights, or change different areas in a restaurant for the brightness level and color-changing modes(fade or flash etc). You can even separately manage hundreds of flashing disco lights for a club or stage.

DALI RGB controllers are usually the control system for larger projects, like for controlling all the lighting for one building. They use a different control protocol called Digital Addressable Lighting Interface, short as DALI. The powerful controller allows users a great deal of lighting control options similar to DMX controllers. Users of DALI controllers are often hotels, large stages, offices and family buildings.